Grow shortcut trees in Visual Studio Code with Which Key

Leaving Emacs and vim for the tepid embrace of VS Code has some perks and some downsides.

The perks: Time to hack on things for fun that don’t use elisp, Vimscript or Lua.

Which Key in Emacs, Neovim and Helix

Which Key displays a shortcut menu in a pop up when you press a key:

Pressing the key on the left (“1”) performs the action on the right (“delete-other-windows”). New users get fast shortcut discovery. Experienced users get a free memory boost and the superpower of building visual menus from trees of rapid-fire shortcut combos.

Other editors stole Which Key because it’s a great idea. There’s a Which Key extension for Neovim. The Helix editor ships with a similar thing, making it easy to experience in your terminal right now.

Let’s install and launch Helix quickly, if only to convince ourselves that the fleeting pain of manually configuring something similar in VS Code as we’ll do next is worthwhile.

Exit Helix the same way you exit vim: throw your computer into Mount Doom, or type <Escape> to enter normal mode, then :qa!<Enter> to quit all views without saving.

By now you get the idea. Which Key helps you navigate a tree of customisable keyboard shortcuts with a lens on accessible sub-branches.

Which Key for VS Code

VS Code already supports shortcut “chords” — a chain of keypress actions that trigger a command when you complete the sequence. By default on macOS ⌘K followed by ⌘C will comment out the current line in the editor (and like Emacs you keep ⌘ held down; no need to lift command between pressing k and c, hence “chord”).

There are 46 chorded options after ⌘K by default. But VS Code won’t give you hints about what they are (despite a 2016 feature request). You have to discover and remember the sequence you care about, like learning the church organ or studying Tekken combos and pretending it’s fun.

When you press ⌘K in VS Code it assumes you know what to press next, which — speaking for myself — is far too generous:

With Which Key for VS Code it doesn’t have to be this way. The extension helps VS Code users grow their own shortcut trees of mini menus with built-in hints.

I press ⌘L (for ‘list’) in VS Code to summon my root Which Key menu: 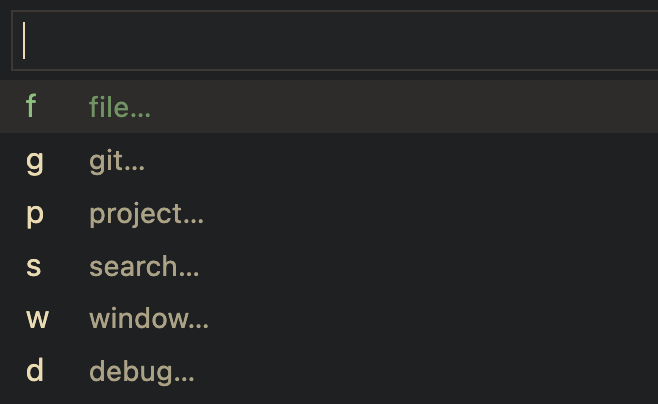 I release ⌘L and press “g” to show my git commands submenu:

Helpful git commands are one more keypress away. They use mnemonic sequences that make sense to me, because it was me who chose them and not Microsoft (‘git init’ → ⌘L g i, ‘GitHub’ → ⌘L g h, and so on).

If you like the look of this stuff but don’t want to spend time configuring custom commands and shortcuts, you could install the VSpaceCode extension. It comes with a bunch of shortcuts that someone who probably isn’t you configured.

The VSpaceCode defaults are fine and they’ll be faster to start using. But you’ll end up with menu items you don’t care about, missing commands from your daily workflow, as well as mnemonics that are pretty good but perhaps not what you would have picked, simply through the gift and curse of not sharing a brain with the plugin’s authors.

For me it’s better to grow your own tree of shortcuts from scratch with the commands you really want. To build custom trees like this you don’t need VSpaceCode, just Which Key (from the same lovely authors):